Anya Stonelake/White Space Gallery presents the first solo UK exhibition of Lithuanian-born Algirdas Šeškus, whose photographic work marked a turning point in Lithuanian contemporary photography. This exhibition brings together a selection of images from his new book Lyrics of Love. Šeškus writes: “Well into my sixties… it is only now that I see to better understand love; or rather that feeling of longing – the most vivid sign of love or loss of it”.

For over 30 years Šeškus practiced photography without any specific trend or direction, choosing the aesthetics of “amateurism” instead. This strategy enabled Šeškus to straddle both the underground and the official art scene. His photographs reveal the (anti)aesthetics of (neo)avant-garde – their experimentalism and originality stretching the established boundaries of Lithuanian photography.

Art critic Lev Anninsky describes Šeškus as rebelling “against ‘romantic photography’… He (Šeškus) describes himself as a ‘provincial with the camera,’ a man from the backwoods who has come to the ‘sea resort’ or a ‘big city'”. His photographs are indistinct, blurred compositions. Šeškus does not title his photographs or indicate where and when they were taken.

Šeškus’s works have influenced the rise of post-modernist tendencies in Lithuanian photography. In the early 1980s the new photographic language was introduced by Alfonsas Budvytis, Vytautas Bal?ytis, Remigijus Pa??sa, Gintaras Zinkevi?ius, and other photographers of the new wave, who preferred the position of passive observers of reality as an alternative to the prevailing romantic vision of the world. His debut in 1980 took place at the Young Photographers’ Exhibition in Vilnius organized by the Association of Photographic Art and the works revealed a new phenomenon at odds with the Soviet culture. In 2010 he was the subject of a major retrospective at The National Art Gallery of Lithuania. His publications include: Green Novel (2009), Archives (Pohulianka), and most recently Lyrics of Love (2011). 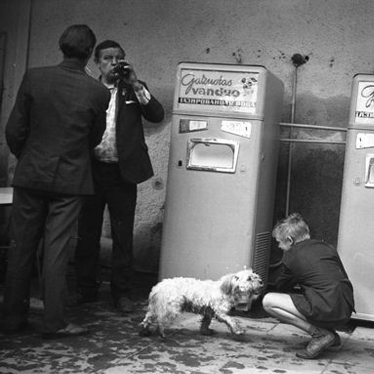